Are You Using Peroxide Forming Compounds? 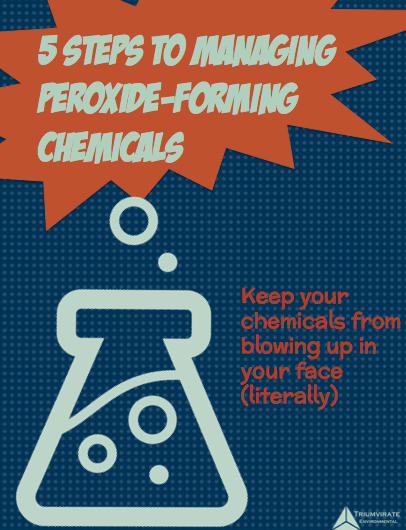 
Click this link for your peroxide forming compound guide. A student at the University of California, Berkeley was injured in a peroxide-forming chemical explosion in November of 2006. Glass fragments shot into her face and torso. She needed stitches above her eyes as well as other hospital treatments.

Peroxide formation is a possibility with many laboratory chemicals by auto-oxidation and can result in unexpected lab explosions which could lead to injuries and even fatalities.

Peroxides can form when bottles containing these chemicals are exposed to light, heat, oxygen, moisture, or impurities. When they have formed, unscrewing a cap can contribute to a peroxide explosion.

Small things like air exposure and the presence of dust on the threads of a screw cap can contribute to crystals forming an explosion upon opening. The explosion this could cause could break a bottle into pieces in a millisecond and send shards flying with enough force to fatally injure a researcher.

Other chemicals can become explosive if they become concentrated through processes such as distillation or evaporation during laboratory research. Some of these chemicals are diethyl ether, tetrahydrofuran, 1- and 4- dioxane, isopropyl ether, cyclohexene, glycol ethers, decalin, and 2-propanol.  Here is a list of common peroxide forming chemicals. This list is not complete. To determine if you have any peroxide chemicals in your workspace, contact one of our specialists for a consultation.

Chemicals can form dangerous peroxide by-products  in a number of ways. The most dangerous chemicals are those that become potentially explosive when stored for a certain amount of time – usually after 3-months of opening. Isopropyl ether and vinylidene chloride are examples of such chemicals.

How do I Prevent Peroxide Former Related Injuries in My Lab?

It’s important to audit your chemical supply thoroughly before determining whether or not
you’re using peroxide forming chemicals. Here are some basic tips for preventing peroxide formers from becoming explosive:

For more detailed information on how to manage peroxide formers, check out the guide below.

EHS
Saving Time and Money Through A Sole-Source EHS Partnership