compoundmanagement. For those of you who missed it here are the burning questions from the presentation and the answers directly from our expert. If you're interested in listening to the rest of our webinar, check out the video at the bottom of this post.

Can you discuss the Massachusetts permit processes through the DEP?

Massachusetts DEP requires a permit to treat peroxide contaminated material. The DEP requires a workplan outlining where the material is stored, where the opening will take place and how it will be done. This included maps, MSDS’s and resumes of those people performing the work.

What is the testing procedure to determine the peroxide concentration?

There are many lists out there, the NFPA is one of the more comprehensive lists. The NFPA refers to D.E. Clark Peroxide and Peroxide Forming Compounds.

What causes peroxide formation to happen, in terms that would allow them to easily explain to their lab workers?

Exposure to air, light and heat all contribute to the formation of peroxides. The oxygen bond is weak in the peroxide forming chemicals and can readily break and bond with additional O2 in the bottle

What’s the shelf life of peroxide test strips?
1 to 2 years

What’s the best course of action if I just realized I have peroxide forming chemicals and hadn’t realized it before?
Only personnel familiar with peroxides should evaluate the bottle and deem it safe to open. The material should be evaluated visually to see if anything can be determined. If it is a glass bottle this is easy, look for crystals, or cloudy liquid. The metal cans are more difficult. Getting information off of the label can be helpful.

If a scientist were to carry out testing in house, would Triumvirate accept those results when disposing?
Yes, but we would like to know when the material was last tested.

What’s Triumvirate’s pricing on this?
Pricing depends on the quantity, type, peroxide concentration and location of material. These factors will affect the time required to complete the job.

What are the pros and cons of having an outside servicer like Triumvirate coming in as opposed to doing everything in house?
The Pros- dedicated expert resources that can come to site and start immediately going labs and chemicals. The Cons- I do not see any, another set of eyes reviewing material can be helpful.

How do I tell if peroxides have formed in sodium amide if I have it stored as a solid?
Sodium amide is a white or gray, if there are peroxides forming the material will change color- yellow, brown or purple depending on concentration

The testing strips we utilize are only for aqueous solutions, is there a testing strip for solids?
There are no tests for solids. The solids will change color when peroxides form.

Are test strips effective for corrosive peroxide formers? For an example, lithium disoproprylamide.
Many of these materials could interfere with the peroxide strips (chlorine, iodine) . These chemicals are in ether or tetrahydrofuran but are typically water reactive and testing can be more hazardous. These chemicals often will fall out of solution and crystalize. The crystals are not peroxides just the material reacting off.

If we have a treated, reduced and now peroxide free solvent, do you pick it up as a flammable solvent?
If the material has been treated it will be shipped as a flammable corrosive solvent due to the addition of acid to break the peroxides down.

What’s your advice on following the expiration date on the ether bottle?
If it can still be used for the process intended it is good to use. However, the guidelines out there state that you should discard after 1 year. If you keep the material you should  test the ether on a regular basis to make sure it is not forming peroxides.

Does Triumvirate have a whitepaper or a brief summarizing this information?
Triumvirate has a copy of this webinar, a printable handout for your employees,  and a guide on managing peroxide forming chemicals. For more information on management or consulting, contact one of our experts. .

Most ether bottles are aluminum and you can’t see in them, if I had one that’s ten years old, should I risk opening it?
The material should be evaluated by trained personnel before it is opened

What constitutes proper storage for peroxide formers? I keep ours in a stock room that is heated and air conditioned and the containers seem well sealed, is there anything else I should do?
The storage conditions you have are suitable. Typically cool, dry and dark locations are the best for peroxide formers. If you have a flammable cabinet within that room that would work. I would make sure the cabinet isn’t near any heat vents or piping. The conditions contributing to peroxide formation are heat, light and air. If you have the heat at room temperature that should be fine. Please remember the age of the material, how often opened and exposed to air as well as if it is inhibited or not will effect if the peroxides will form.

For more information on peroxide forming compound management, contact one of our experts. 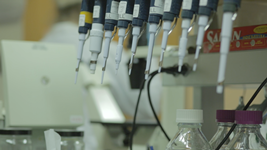 Laboratories
Is Compliance with NIH Guidelines Required for Biohazard and rDNA Permitting?