Last week, we hosted a live webinar on waste stream analysis with undustry expert Steve Todisco. Here's a transcription of the live Q&A from the end of that webinar.

Yes, that's a great question. Pharmaceutical waste does represent a very small percentage of the total waste volume. You have to understand that most of the fines in the last three to five years have been on pharmaceutical waste. It's a huge opportunity in disguise. You can take that tiny little waste stream and make sure that you're managing it as officially as possible so that your waste budgets come down. Being a regulator focus and being specifically one of the drivers of fine and citations over the last half decade, it's probably one of the biggest components of making sure that small waste stream is managed appropriately.

The other reason is it touches more people in your institution than a lot of the other programs. Most of these other programs are focused department by department while pharmaceutical waste is across all the clinical and non-clinical practices such as nursing, pharmacy, the doctors and all the different departments whether it will be high risk areas like the OR, the ED or the PACU. It's very important to maintain that level of compliance in a program that such high priority throughout the institution.

I hope that answers your question. There are million and one reasons to build a great pharmaceutical program. Those are just a couple.

That's definitely a great question. We get this a lot and typically from small to midsized healthcare outside of big cities, within a pretty good radius of a major city like outside of Boston or New York. Specifically the answer to the question do you have to collect your alcohols is yes. The EPA under Federal Law under RCRA regulates that all ignitable material, and they define ignitable as having a flash point of less than a 140F, be collected for hazardous waste disposal.

There are some exceptions like the 24% alcohol exception. If you have an alcohol that's less than 24%, then you might be exempted from that material. The alcohols that we see in laboratories is the primary driver alcohols for waste collection throughout an institution and healthcare, is nowhere near the 24% exception. They're all on the 95% to 100% range and will obviously not apply to things that are not specifically alcohols.

When we talk about alcohols and alcohol exemptions in opportunities allowed to collect, we're thinking of things like isopropanol or ethanol. There's not very many of them. Healthcare will generate xylene and other ignitable solvents as a component with their ignitable alcohols. Make sure you definitely collect those alcohols even if you have a letter from your local's or POTW. They like those alcohols for different reasons. Ultimately, you have to always comply with the more strict regulation. In this case, the more strict regulation falls under the federal RCRA regulations related to ignitability.

In my hospital, we used only green tip light bulbs. We have been told that these bulbs are not considered universal waste and they can go into the trash. Is this correct?

That's a great question. Again, that's another one that we get a lot. The industry is shifting. If we see a lot of green tip bulbs, depending on your institution and your abilities to purchase, you may or may not have some of those. All the green tip bulbs mean there is less mercury vapour inside that light bulb.

There are a million and one studies out there that show that this doesn't fall below the regulated levels all the time. If you were to run a split, it’s about 75% of the material. All light bulbs are not created equal. If you have a hundred of those light bulbs with all the same make, model and manufacturer, 75% of them, according to the studies, will actually still trip. It's called the TCLP value or TCLP for mercury.

All the RCRA metals are regulated and mercury is one of them. In this particular case, it's the mercury vapour inside the light bulb. There are very few that analytical has been run that come out of the hazardous waste category. The trick is knowing which ones are which because you're not really going to do analytical in every single light bulb before you dispose them.

So, yes, you are required to collect light bulbs as universal waste to the environment. If you have green tip light bulbs, you have a couple of options. You can both comply with the stricter standard and collect that material for waste disposal, which in this case recycling. Or, you can perform analytical and perform that  within a reasonable time frame. You have to continue doing

I hope that answers your question. It's a tricky subject because a lot of the manufacturers will push that these light bulbs have less mercury in them and that they may not be regulated in the same way. They're absolutely true but there are some sticky points related to the levels that you'll see in those light bulbs of mercury vapour.

Someone wants to know if you could tell us a little bit more about collecting controlled substances under the pharmaceutical waste arena?

Yes, sure! Narcotics are very hot topic again for a couple of different reasons. One of them is the diversion of those narcotics. When you think about hazardous waste and hazardous waste in pharmaceutical programs, it's a very small window of what you're required to do.

There are a couple of narcotics that we think about when we're looking at RCRA regulated narcotics. Probably one of the most common ones that we see is chlorohydrate. It is a U-listed hazardous pharmaceutical waste that also meets the definition of narcotics. In the event that you have something that was both a RCRA regulated narcotic and something that fell under one of the spectacles of narcotics, you will be required to collect that if and when you had any material leftover that still met the definition of that particular hazardous waste.

Just to follow up on the example of chlorohydrate, if it has been spent for its intended purpose and RCRA empty, which is less than three per cent of the total liquid volume of the container, falls out of that category. We see people collect very little hazardous narcotic waste because one is that chlorohydrate is none by the way side. Not everybody generates it. And ultimately because this material get to be used and spent for its intended purpose and doesn't fall into the hazardous waste characteristic of U34 code for chlorohydrate.

There have been some recent additions by the DEA to help hospitals in particular become generators of waste narcotics from patients so that their community can bring narcotics to them. There is some registration requirements and definitely maybe another webinar where this is a great big topic to get some narcotics off the streets and get them into a place where they could be managed appropriately.

Could you tell a little bit more about how RMW can be converted to a plastic?

It's an exciting process. Just to back up for two seconds, we've been looking over the last six years on how to better handle some of the largest streams in healthcare. One of that being solid wastes. Solid wastes recycling has absolutely taken off another being medical waste. As part of medical waste, believe it or not, based on our studies about 78% of all the materials that goes in red bag waste and as sharps waste, it's actually plastic already.

We have a unique process at one of our facilities where there's a source separation component where we take the hard part of things that end up in those waste containers, which as you understand is quite a lot. We separate them and think of it like a brew master. You want to pull all that stuff apart and its component pieces and put it together with the right components so that we can make what's called a low grade industrial plastic that could be used for industrial forms and things like that.

When I say that we make a plastic, we make a real live plastic product that gets sold on the back so we can offset some of the disposal cost and share those cost savings with the customers. We ultimately get to help in their medical waste programs as for materials for recycling. There are a lot of specifics and new ones in the actual plasticization process and the source separation process. It can take a lot of grinders, shakers, magnetics and things like that to use source separation. It's about taking all the components apart and putting them back together again in the right form so that we can produce what is ultimately a low-grade plastic product for use.

For more information on managing your waste streams, check out our waste minimization checklist in the link below. 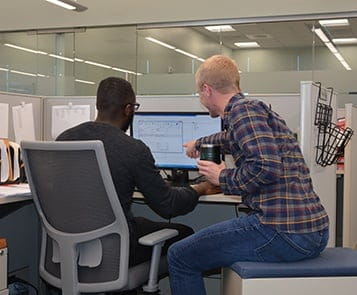